Last night I received Robert Genn's newsletter "The Painters Keys" informing his subscribers that he has been diagnosed with terminal pancreatic cancer. Robert described this news as a "The Bomb".

I only met Robert Genn  once in person at the Sidney paint out competition about 4 years ago where he was juror. However, I've been receiving his biweekly newsletter "The Painters Keys" since 2005.  I've come to look forward to these letters which were his ponderings about art stuff (usually in response to letters from other subscribers).

Although I was one of many thousands of subscribers world wide I looked forward to it in my email as though it were a letter from a friend.  It was insightful, often amusing, thought provoking, and always personal.  Thank you Robert.

Pardon the glare. A work in progress. I liked the motifs that surrounded and covered the girls. A very limited palette but exciting.
Posted by Darlene Young at Wednesday, October 23, 2013 No comments:

702 Red and Yellow Tulips in a Jar

I found these pretty red tulips with yellow edges at the local grocers. I haven't seen tulips since the spring and I just had to paint them. I've been stuck on the girl in the library painting lately. Sometimes when I'm on a big painting I find I find it hard to break away from it onto something else. But sometimes it's the best thing I can do.
Posted by Darlene Young at Saturday, October 12, 2013 No comments:

The Girl in the Library (in progress) 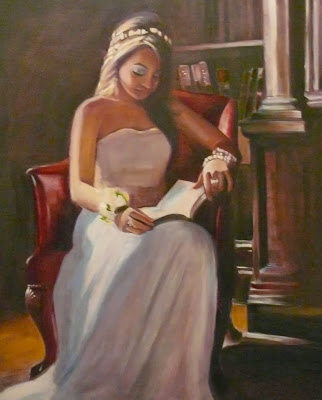 I changed the dress a little to a smoother look. Still more work to do on this.
Posted by Darlene Young at Saturday, October 12, 2013 No comments: