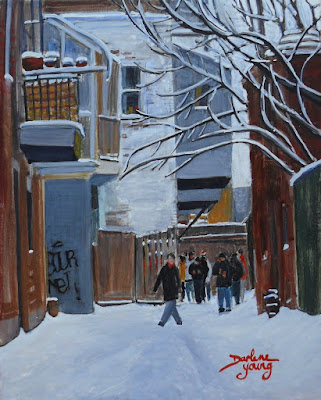 Here's a curious lane in the McGill Ghetto.  (Always a gathering of young people there). I always liked the jumble of structures in this lane.
That grey structure in the background attached to the house and braced is the remnant of an old shed.  They removed the bottom part and braced it. Sheds, once a common part of most houses in Montreal, but the city outlawed them in the 1980s due to many arson attacks that started in sheds.  Sheds used to house the boiler and oil tanks for the heating system. Our boiler was dated 1903 in the 1980s and it was still working fine.  Those hot water radiateurs were so nice and efficient. Great for drying mittens. They don't build things like they used to eh.
Posted by Darlene Young at Sunday, November 03, 2019